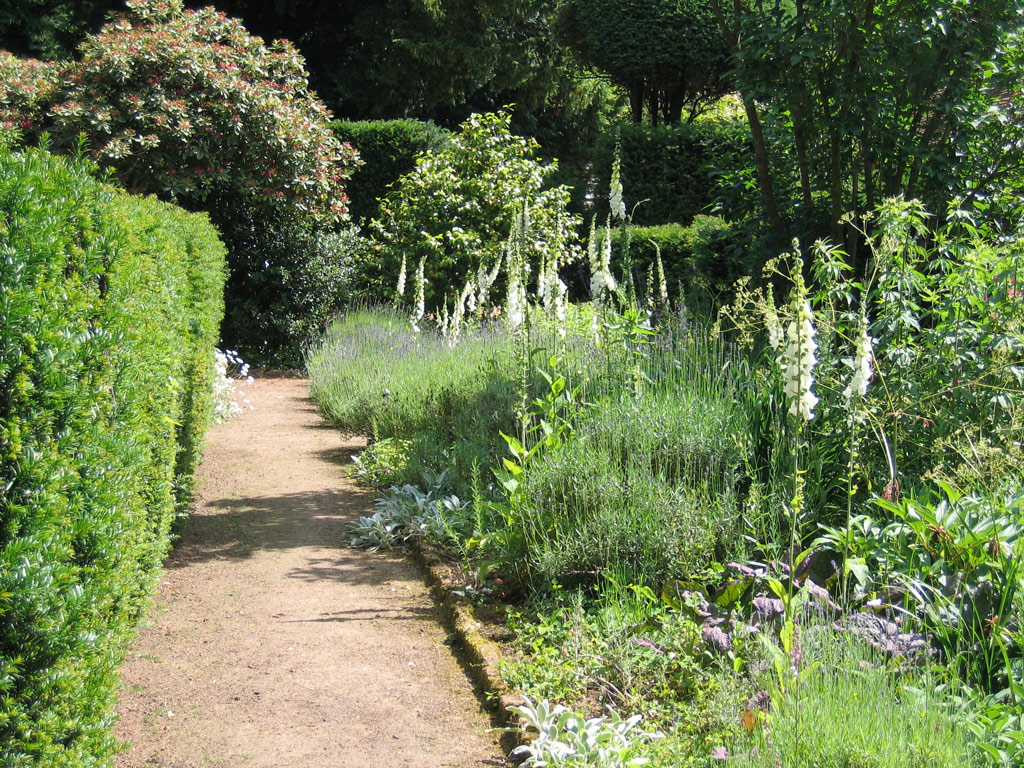 Munstead Wood – a place of legend , existing on the edge of my imagination.
It seemed hardly likely that it could be a 21st Century reality ?
But, approaching through the deep lanes of West Sussex, overhung with trees, it was so exactly as Gertrude Jeykyll described in ‘Home and Garden’ that I began to believe it possible.

Disappointingly, the approach to the house has submitted to modern convenience and the original bosky path to the front door has become a drive. But when you see the powerful entrance archway with its tiled detail, you know that you have arrived. This dramatic architectural gesture leads into a long covered loggia and the most unassuming front door with metal bell pull is hidden away at one end. The loggia is more familiarly known by the photograph taken from the garden side with its great tubs of flowering hydrangeas.

The house is perhaps larger than expected, and craftsmanship is evident in every detail – I longed to go inside it, to open windows and look out on the garden as she saw it. In front of the house is an expanse of lawn and beyond that is the woodland with its tempting paths. A deer fence now bisects the ‘copse’ from the garden and spoils the intended merging of the cultivated and the wild –
I wonder how Ms Jeykyll dealt with this problem ?

My mental picture of this garden had been so formed by her written descriptions and photographs that at this point there was some disjuncture. The borders around the house seemed lacking in the charm and detail which I somehow felt they should have had.
Similarly, the pool garden has not fared well over time and had some dreadful re-pointing. The whole design seemed over-detailed with multiple changes in level and rather small in scale. It doesn’t display the skill that Lutyens subsequently developed. The original plan for this part of the garden shows only a simple tank, so I wonder when and why the more complex design was installed – ?

However, the beautiful water-rippled stones that pave the North Court, leading back towards the house, largely remain, although some are cracked and others have been replaced and again bad pointing despoils the whole. But above the seat that sits against the house wall is a plaque giving the genesis of the house.
“ Built by Thomas Underwood for Gertrude Jeykll
Edwin Lutyens Architect
1896”
A credit to the ‘ perfect understanding existing between the architect, the builder, and the proprietor’ This brings you back to what is important here.

One aspect of this visit that surprised me was the degree that Munstead Wood was run very much as a business enterprise, not only developing and growing plants for sale but also pot-pourri, flowers and flower arrangements. The Flower Shop itself was integral with the house, its beautiful oak door leading directly onto the terrace.

Beyond the pool garden is a small summerhouse with a pebble floor and a simple timber pergola that visually separates the formal area close to the house from the wider garden.

Beyond is the Nut Walk which leads along the woodland edge full of white foxglove seedlings. There are primulas are under the hazels, which reminds me of the photograph showing Jeykll sitting and splitting primulas after flowering – was that here ? And did the sight of these inspire Vita Sackville West when she laid out Sissinghurst ? Vita visited Munstead Wood in 1917, so it is possible.

The path leads down to the famous Long Border that runs in front of the beautiful stone boundary wall where a gate leads through into the marvellous area where plants were grown and tested, and colour combinations experimented with. This part of the garden is now in separate ownership but is managed with great love and care for its origins. I very much enjoyed this part of the garden.
Returning back through the gate and along the border to see the original greenhouses and cold frames that were a necessary part of the business of raising plants. Remarkable that they still exist.

Walking back towards the house through mature oak trees there is a complete surprise, the well named Hidden Garden – the rockery ! Re-discovered quite recently when a dip in the lawns was investigated. I suspect that it received better light in Jeykll’s day and can understand how it came to be covered over, but it is wonderful to see the reality of something previously only known by the illustrating photographs in her books.

Emerging from the diversion of the rockery you see the great house, sitting softly in its essentially woodland setting. The set-piece herbaceous planting, for which she is so justly famous, takes up but a fraction of the garden. Above all this visit to Munstead Wood brings home to me her sensibility and love of the natural world.