“ If he has an inexhaustible feeling for the country in general. his love of the myriad English flowers is perhaps the fondest part of it” 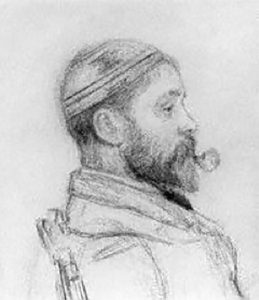 That was how Henry James perceptively described Alfred Parsons.

And every aspect of Parsons life and work was focussed on his love for plants.

He was born in 1847, the second son of Dr. Joshua Parsons, a country doctor with a passion for herbaceous and alpine plants. Perhaps it was this that drew him into the world of gardening and developed his talent for detailed observation and botanical illustration.

In 1869 he enrolled at South Kensington School of Art and began painting landscapes, first exhibiting at the Royal Academy in 1871, but painting did not immediately earn him a living.

He became an early member  of The Art Workers Guild in 1884 and met Arts & Crafts Phillip Webb.  It is suggested that through this he became involved with the garden at ‘Clouds’ for Percy Wyndham. 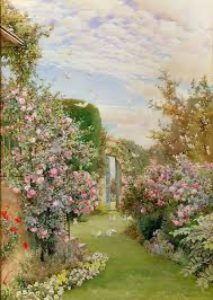 At the time he  was sharing a studio in Bedford Park with two American expatriate painters, Edwin Austin Abbey and Francis Millet and in 1885 Parsons and  Lawrence Hutton, editor of the influential American magazine ‘Harpers’, went to Broadway to visit William Morris, whose studio was in Broadway Tower. The peace and beauty of the Cotswolds was alluring, and something of an artists colony soon developed in Broadway.

Millet, and his wife Lily, took Russell House on a seven year lease and Parsons made them a garden. It was a garden made for friends and no drawings were made.  When the acclaimed Shakespearean actress Mary Anderson and her wealthy husband Antonio Navarro bought Court Farm in the same village, Parsons transformed the farmyard into a garden, complete with terracing, a swimming pool, herbaceous border and rose garden.  The Broadway gardens grew in repute.

Mary Anderson writes in her memoirs “ his hobby and recreation was the planning and planting of gardens”  I think this is an important observation. At this point of his career Parsons was a very successful painter and illustrator. He was generous with his time and advice and enjoyed helping his friends. He advised William Robinson at Gravetye Manor, designing a porch for Moat Cottage, and making many paintings of the landscape. He also visited his friend of many years, Henry James, who had just taken a house in Rye, walking round the garden to show him what beauties it possessed, and brought plants to Winchelsea for the costume designer, Alice Comyns Carr.

But in 1898 he went into partnership with Captain Partridge, an old Etonian and freelance land-agent who saw garden-making as a potentially lucrative business and proposed to undertake the financial side and draw clients in. The other partner was well-connected Charles Tudway who was to provide ‘additional assistance’. Why did Parsons go into this ? Perhaps he was receiving too many requests for his gardening skills, perhaps it seemed like a good idea to share some of the responsibility ?  Neither of his partners  had any experience of landscaping and Parsons was the sole input of creativity and plant knowledge, although Partridge persuaded Tudway to start a plant nursery, and supply the gardens they made to provide an additional income stream.

From 1899 they were landscaping at Welbeck Abbey and following up a great many new enquiries, including Wightwick Manor. The main reference to these comes from letters between Partridge and Tudway, held in Somerset Record Office.  It is not clear how many of these enquiries actually resulted in commissions, particularly since Parsons rarely did drawings, preferring to mark out ground and discuss proposed planting with the head gardener. An exception to this is the garden for Great Chalfield, for which drawings dated 1908 /1909 survive.  By this time it is clear that the clients preferred Parsons as their point of contact and it was one of the last gardens the partnership made.

Throughout this time he was painting, exhibiting and illustrating, notably for Ellen Willmot’s ‘The Genus Rosa’ for which Parsons made 108 watercolours from live specimens.  He was made a Royal Academician in 1911 and spent an increasing amount of time painting, growing roses and gardening at Luggershall, the home he made for himself in Broadway.

The only book he published was a travel diary of his time in Japan, in 1892, which he tellingly spent painting topographical scenes and individual plants, rather than gardens. I think this returns us to the essence of the man and his abiding love of plants.

Despite the lack of  written record he remains a seminal figure of the period.